Some fellow translation companies may ask why we have to share this 'silly' idea on converting more advanced and current file extension to the earlier version. The answer is simple. We would like to be as friendly as possible to all translators. Having a lot of translators with complete CAT tools is not our priority. Our priority is to have a lot of reliable and quality translators and we have to go extra mile to have them.

Recently, we source some freelance translators to back up our team working on some new projects. Many applications came in and we had to sort them out. Until, we found one that we thought she would fit the criteria we set. We looked into her latest CV, checked every single detail, and we finally decided to hire her. Unfortunately, she did not have the CAT tools we require, SDL Trados 2009 and later versions. She had 2007 version only that was too old for us as we are now using SDL Trados Studio 2015. As we did not want to let qualified translator go, we thought super hard of how to still be able to hire her without asking her to install latest SDL Trados Studio.

Now let us show you the how-tos. First, create an SDL Trados Studio project as usual and after you create one, you then need to go to each folder to convert. Say you are now working on English to Indonesian translation, so you need to go to an id-ID folder and open it. 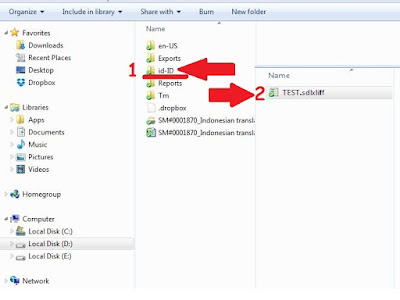 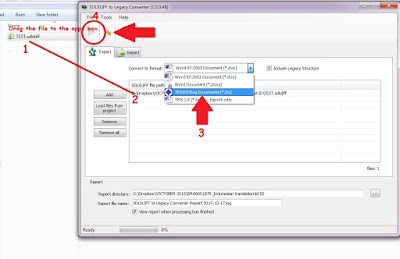 The translation process can be taken care by the relevant translator and when the translation is done, you will still receive the file in .ttx format and it is time for you to revert it back to .sdlxliff file. This is done to save your time. We say this because based on our experience, working in SDL Trados Studio can be faster than working in SDL Trados 2007 (around 40% faster). Now, please click on Import tab, drag the translated .ttx to the SDLXLIFF To Legacy Converter box and click on Play button and now the translation in .ttx file is moved to .sdlxliff file. 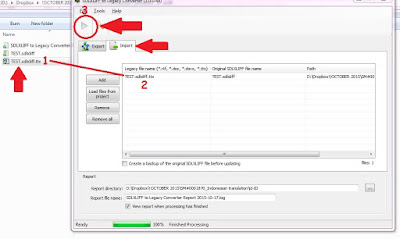 It is simple, isn't it? Contact us if you have any questions!

Posted by probahasa translation at 3:46:00 AM